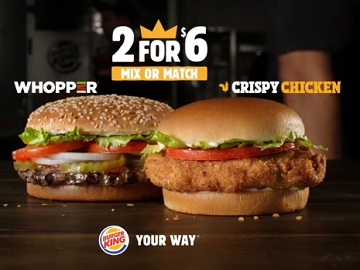 Burger King promotes its 2 for $6 Mix or Match offer in a series of new ads, highlighting that you can mix or match two Crispy Chicken or WHOPPER Sandwiches for just $6.

One of the 15-second spots features the King (the chain’s advertising mascot) showing off his dance moves on a stage, in front of people come to see him, and holding a Crispy Chicken and a WHOPPER Sandwiches on two different plates in his hands.

“That’s two WHOPPER Sandwiches, two Crispy Chicken Sandwiches or mix one of each for just $6.” – the voiceover says at the end of the spot.

The fast-food restaurant chain also informs that no substitutions are possible and that a single sandwich of the two subject to the offer are at regular price on menu. This offer is valid for a limited time only at participating restaurants. Prices are higher in Alaska and Hawaii.

The King, who has been used in several ad campaigns over the course of time as the chain’s mascot, returned in 2017, after a 2-year break, to star in new commercials promoting the new “Mac and Cheetos” and flame grilled whoppers.