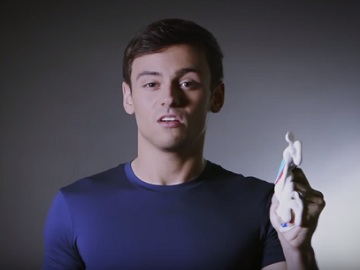 Tom Daley shows people how to dominate value in the latest ad released by Bulk Powders. The British Olympic diver stars in a 30-second spot, revealing a secret of the toothpaste industry.

“40% of the paste gets thrown in the bin once it becomes hard to squeeze. They’re currently laughing at us, but not for much longer. Because I use Bulk Powders and can squeeze out the rest of the paste. So, now, they’re just laughing at you.” – Daley says while squeezing a toothpaste with his left hand.

The spot is part of the “Dominate Life” ad campaign recently launched by the sports dietary supplement brand, campaign that also stars Anthony Joshua as new spokesman. The latter shows people how to dominate gardening and how to dominate life in hilarious adverts.

Daley, who agreed a partnership with Bulk Powders in October 2017 to promote its Pro Series range, said he uses INFORMED WHEY “most days after training, and often in the mornings with breakfast to kick-start the day”, revealing that double chocolate flavour is his “absolute favorite”. He also said he uses PROM3GA, containing Omega 3 Fish Oils and Vitamin D3, and Liquid Egg Whites, as well, the last ones being “an absolute must”.