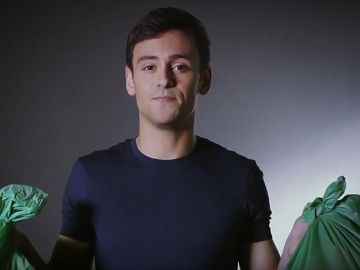 The 30-second spot, created by Droga5 London, features the British Olympic diver holding two garbage bags and revealing what he has in them. “People often say ‘One man’s trash is another man’s treasure’. Who am I to judge if you want to rummage though my trash? I’ll tell you what you’ll find there: empty packets of Bulk Powders, which help me dominate life. And… the entire encyclopedia. Because I know you’re looking through my trash and I want to think I’m smart.”, Daley says, adding the word “verisimilitude” to be more credible.

Daley, who agreed a partnership with Bulk Powders in October 2017 to promote its Pro Series range, also shows people how to dominate value in a spot in which he reveals a secret of the toothpaste industry.