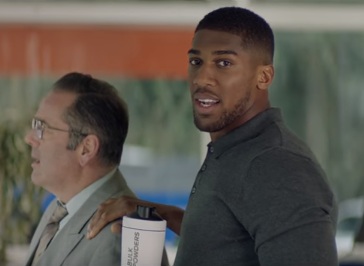 Anthony Joshua stars in a new commercial for Bulk Powders, the nutrition supplement brand he signed an endorsement contract at the end of last year.

Created by agency Droga 5 London based on the idea that it’s good to be realistic when it comes to making New Year’s resolutions, the 60-second spot features a sale representative working in a used cars store with a potential client in front of him. “What have we here? A formidable challenge. There’s no chink in his armor. That exquisite, vascular armor. No weakness to exploit. He seems so calm. He must bench press. How much bench can he press? There’s no way he could know the true value of the car.” – the man is heard saying. He starts sweating heavily, strains his eyes, and clenches his fist as he watches the young man looking back at him. “He’s given me nothing. What kind of mind game is this?” – the rep is also heard asking in despair. Soon, he realizes he hasn’t been using his inside voice and the guy heard everything he’s been saying.

The spot ends with the young man hitting the road at the steering wheel of a car purchased there and with Joshua showing up behind the sale representative saying “That’s how you dominate life!” and drinking a Bulk Powders supplement.

The heavyweight boxing champion, who became a brand ambassador of the nutrition suplement brand in December 2017, will also star in other commercials, encouraging people to dominate other areas of their lives, including gardening. As of the nutritional products, he said he can “easily incorporate” them into his busy training routine.