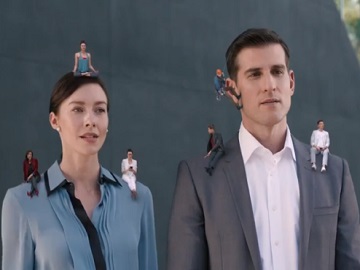 The 30-second spot opens with a young man at a Buick dealership, looking at the All-New Regal Sportback sedan, the All-New Regal GS sedan and the First-Ever Regal TourX wagon. “I think I know which Buick…” he says, admiring the three vehicles. At this point, two tiny versions of himself, each of them sitting on his shoulders, start talking to each other about the decision the guy will make. “He’s going to pick the Regal GS,” the guy’s alter-ego from the right shoulder says. “No, he clearly wants the innovative Sportback,” answers the other one. “He’s all about the Regal TourX,” a third one informs, climbing down a rope from the top of his head. Still looking at the new Buick Regal cars, the man asks his wife, Jess, who shows up near him, what she thinks. The voices in her head are also illustrated through small versions of herself, sitting on her shoulders, too. While the first one advises her to choose “the powerful GS”, the second one tells her she wants “the innovative Sportback”, and the third one, who’s sitting in a yoga pose on the top of her head, simply says “The all-wheel drive TourX”, which makes Jess conclude that “it’s a tough choice”. At this point, the tiny version of Jess’ husband asks the three “gals” if they are triplets and the reply he gets is “I’m one of a kind, baby!”.

“Which All-New Buick Regal would you choose?” the voiceover asks at the end of the spot, while viewers are directed to the brand’s website, at the section called “whichRegal”.

The All-New Buick Regal GS Sedan, featuring “racing-inspired design” and “heart-racing performance” thanks to its massaging, heated and ventilated GS-exclusive front sport seats, 310-hp V6 engine, intelligent All-Wheel Drive with active twin clutch, Interactive Drive Control, and Brembo front brakes, and other features that ensure an “exhilarating driving experience”, has a msrp starting at $39,070, the First-Ever Regal TourX Wagon, described as “the perfect partner for adventure with standard intelligent All-Wheel Drive with active twin clutch, versatile cargo capabilities and integrated roof rails with available crossbars”, has a msrp starting at $29,070, and All-New Regal Sportback, described as being “full of innovative surprises” thanks to its turbocharged performance, the available built-in Wi-Fi hotspot, and the expansive sportback opening, has a msrp starting at $24,990.