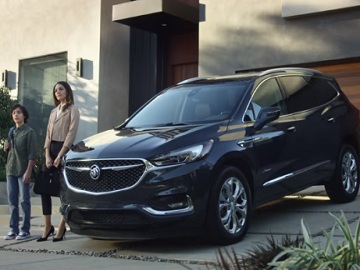 Buick has just released a new ad, introducing the all-new Buick Enclave as the “premium 7-passenger SUV that’s got the whole neighborhood talking”.

The hilarious 30-second spot, dubbed “Neighborhood”, features Wendy, the owner of a new Buick Enclave, being approached by her neighbors in various moments to ask her about it. “What kind of SUV is that?” – a dog walker wants to know. Wendy answers it’s a new Buick Enclave that fits up to seven people… or poodles and is informed that the dog she’s looking at is actually a Berne-doodle.

Another scene features Wendy helping her kids to get off the car and a neighbor noticing that “that really makes it easy to unload all those little maniacs”. When Wendy confirms it sure does, the neighbor tells her husband, who’s carrying a baby in the baby-carrier and holds the hands of their other two sons, that they should get a similar SUV and “have, like, a ton more kids.” Finally, another neighbor is seen in her own SUV asking Wendy if that is a new SUV. The latter says it is and mentions the brand, which leaves the woman staring at it. All these “events” make Wendy’s son conclude that everybody likes their new Enclave.

The commercial ends with the voiceover introducing the all-new Buick Enclave and saying the tagline “Tomorrow’s SUV for today’s family”.