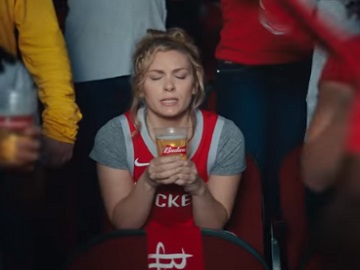 Budweiser continues its “This Bud’s For You” campaign with a new NBA-themed spot, aimed at highlighting that basketball fans “do a lot more with their Budweiser than drink it”. “You don’t just drink Budweiser, you clench it. You rebound it. You guard it. You beg it for a buzzer beater. And pile it on. You buy a round of it for the bar. You raise it to your city. Your team. Your family. Whenever legendary moments happen, Budweiser will be there.

And before every sip, comes a moment worth celebrating,” the voiceover says on the 30-second, which features NBA fans doing all the things mentioned while watching their favorite team.

In another commercial released at the beginning of this year, a narrator tells the story of “a beer rooted in the heart of America”, while an iconic Budweiser Clydesdale horse is seen slowly running through a small city, passing by national monuments and through small farms. The voiceover says that this beer (Budweiser) “was brewed for those who found opportunity and challenge and hope and tomorrow,” and was “raised by generations willing to sit, share, risk, remember.” “This is a story bigger than beer. This is the story of beer country,” he also adds at the end of the spot, before the tagline “This Bud’s For You” flashes across the screen.