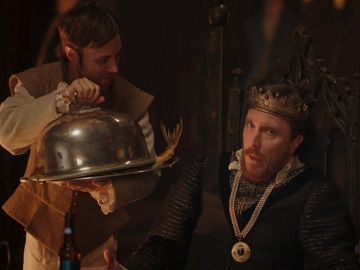 Bud Light celebrates the match between the Atlanta Falcons and New Orleans Saints in a new spot, featuring the King, who is presented, this time, with a dish he hadn’t planned for.

“Saints of New Orleans. Falcons of Atlanta, tonight you meet again at the table of battle and dine on the leftovers of your first encounter back in September. And as everyone knows, leftovers only get better with time,” the King, seated at a table, says and, at this point, he is interrupted by a servant who brings him a covered tray with the King’s leftovers from September. Visibly disturbed by this news, the King suggests his young servant to keep those leftovers for himself. “Thank you, my King. You are generous and wise,” the manservant says in response. He is then instructed by the King to put them in the Royal fridge and label them.

“Anyway, here’s to cleaning your plate at tonight’s battle and leaving no leftovers left over,” also says the King, raising a bottle of Bud Light at the end of the spot.

The Thanksgiving Day Game between the two teams takes place today (November 22, 2018), starting from 7:20 PM, at the Mercedes-Benz Superdome in New Orleans.