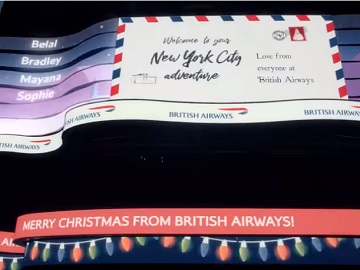 British Airways took four deserving children on a once-in-a-lifetime festive weekend trip in New York City, allowing them to “live like Kevin” through their exciting experiences which were inspired to follow in the footsteps of one of the world’s most famous child stars in a much-loved Christmas film.

The airline has released a trailer for the film that follows the kids on their magic adventure. Titled “Fairytale in New York: A Very Kevin Christmas,” the promo features the little ones on the plane, enjoying treats during their journey and discovering the big city.

“This Christmas, four children on a magical adventure they will never forget. Three days of fun, laugh, and surprises in New York, living like Kevin” the voiceover says, referring to the beloved character from the Home Alone film franchise.

Their full adventure in New York can be watched at the British Airways website, in the BA Magic section.