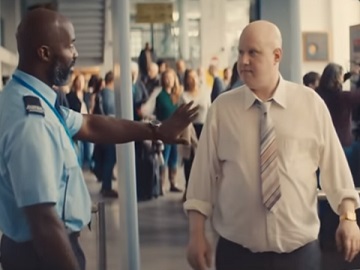 British Airways thanks its colleagues and customers for raising £20m in eight years for Flying Start, their charity partnership with Comic Relief, simply through donating loose change and foreign currency on board flights.

The message is conveyed through a hilarious advert starring English comedian Matt Lucas. The actor portrays a traveller who, after passing through an airport full-body scanner, is asked by an officer to show the contents of his pockets. Taking out some change, he is informed by a British Airways crew member that he can donate his spare currency to Flying Start. When he takes out his shoe off, upon the airport’s officer request, he drops even more change all over the floor, but he doesn’t hesitate to walk on his knees to collect it all and give it to the British Airways crew members, while crowds of incredulous travelers look on.

“Thanks to your generous donations, we’ve raised a whopping £20m for Comic Relief,” the voiceover says at the end of the advert, which sees Lucas dropping, this time, the contents of his bag over the floor.