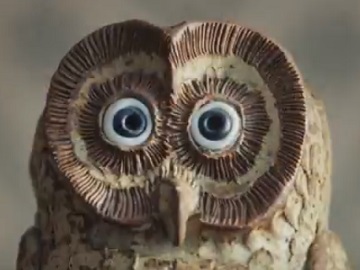 B&Q encourages people to conquer “those unfinished jobs” in a new campaign, released with the tagline “Do it!”.

The campaign film, from agency WCRS and directed by Sam Hibbard, features a couple on their couch, looking at their wallpaper, which needs replastering as it’s getting stripped off, a middle-aged man standing in his backyard holding a rake and looking at the amount of fallen leaves he has to rake up, and a woman sitting on a couch, as well, thinking about getting rid of the threadbare wall-to-wall carpet in her apartment. If they are initially reluctant to the idea of getting to work, wondering if they could do it, their mood changes as some of the objects around them start encouraging them. Thus, a pottery owl encourages the couple on the couch, a pottery frog used a decorative item in the garden encourages the man in the backyard, and a fluffy toy encourages the woman to “do it”. Determined, they all get into their car and head to B&Q, where they purchase the things necessary for carrying out the work they need to do.

The end of the spot sees the couple having their living room with all the wallpaper stripped off and painting the walls, instead, with Dulux Standard Coloured Emulsion (£20/ per 20l), the man using a Bosch blower & vacuum (£65) to clean his backyard easily and fast, and the woman in her apartment, dancing on the new Dolce Walnut Gloss Effect Laminate (now £14 per square meter) she had installed.

This main TV spot is divided into different 10-second spots, focused on each and every animal that is brought to life to encourage people they can do it.