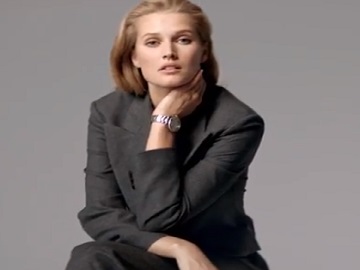 The duo, who were announced as the faces of the Autumn/Winter 2018 campaign earlier this month, are featured in a 30-second commercial, released with the #TimeTo hashtag and aimed at inspiring people to start today to work towards their goals. “It’s time. Time to find your purpose. Time to set the tone. Time to own your ambition. Time to lead the way. This moment is all you have. It’s time,” Cooper and Garrn say in voiceover alternatively.

The collection includes eight different models, available in four metal finishes, hand-stitched straps, and metal bracelets. The BOSS Watches Premiere, described as being “aimed for the female go-getters who know what they want and how they are going to achieve their goals,” marks the hour with a 12 encrusted crystals watch face and is available with four metal casings and a leather strap option.