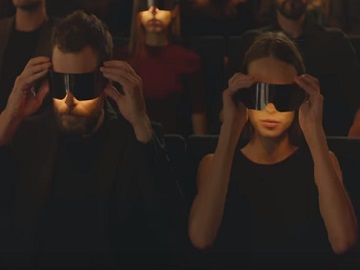 BOSS has launched a new instalment in the BOSS The Scent campaign to mark the release of the latest edition of the fragrance and the beginning of a new story of seduction. Actor Jamie Dornan and model Birgit Kos take centre stage in the campaign film, embodying the “Augmented Sensuality”.

The Fifty Shades of Grey star and the gorgeous blonde attend a piano concert, where she arrives in delay, after everyone takes their seat and puts on the special glasses they have to wear. Finally taking her seat near Dornan, while the artist is performing on stage, she looks him in the eyes and then puts her glasses on, too. He does the same and overhelmed by her charm and sensuality, is looking for her hand in the dark. The woman that almost took his breath away once manages to do that once again, as she stands up and leaves the audience, making him to do the same in an attempt to find her.

The Irish actor and the Dutch model were announced as the new faces of Boss the Scent last month, in August, joining thus the likes of Ryan Reynolds, Chris Hemsworth and Jared Leto.

Earlier this week, Jamie Dornan attended the BOSS Spring/Summer 2019 runaway show at New York Fashion Week, where he wore BOSS. Henry Golding and Emma Roberts were also dressed in BOSS at the event.