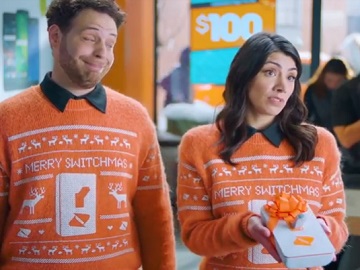 Boost Mobile invites you to get 4 lines with Unlimited Gigs for $100/month and up to 4 free Samsung phones, so everyone gets gifts they’ll love this holiday season.

The 30-second spot, titled “A Switchmas Miracle,” features a man in a Boost Mobile store being shown on a screen, by two Boost Mobile employees, his “Switchmas future,” which sees the man’s two teenage kids not at all impressed by their gift: a snow shovel for each of them. “For real, you can use some Switchmas spirit,” tells him one of the company’s representatives, who’s wearing an orange knit jumper, featuring reindeer and the text “Merry Switchmas”.

The other sales rep urges then the man to switch to Boost and get up to four free phones and four lines for just $100 a month. When he decides to switch and take advantage of this deal, the customer sees his Switchmas future changed, with his kids on Christmas morning delighted by their new phones.

“That’s a Switchmas Miracle,” he says at the end of the commercial, which also sees the voiceover urging viewers to “switch to Boost and get more lines for just 100/month, each with unlimited gigs, and four free Samsung Galaxy J7 phones when they switch, all on a super reliable, super fast, nationwide network”. “Boost makes it easy to switch and switch makes it easy to save,” the voiceover eventually adds.