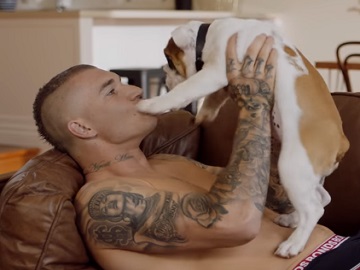 AFL superstar Dustin Martin, recently named a Bonds ambassador, shows off his toned body in a new commercial for the underwear brand, promoting a new line of men’s underwear.

The 30-second spot opens with the The Richmond Tigers forward playing with his dog, Killer, on the couch, while wearing nothing but a pair of briefs. When Killer runs out the door ajar, Martin starts chasing him. Filmed in Melbourne, the hilarious ad shows the tattooed football player dashing off to find his furry friend, dodging garbage bins, truck drivers and fences on his way, and also jumping on a tram for a short ride, in his effort not to lose him. Eventually, he manages to get back Killer, whom he finds in the arms of a gorgeous young woman, that looks at him obviously charmed by his body. Throughout the ad, Martin wears a red white and black pair of undies.

Dustin Martin officially joined the Bonds family as a men’s ambassador on January 22 to front the campaign for the brand’s latest men’s undie range. In an interview with Bonds, he talked about his childhood, about his career, his pre-game rituals, his tattoos, and also answered some quickfire questions.