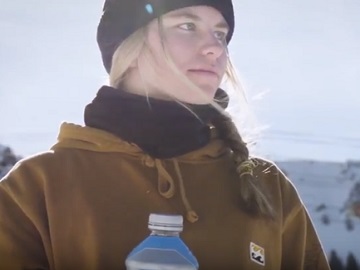 Maddie Mastro talks about how she got to where she is now in a new commercial for BODYARMOR Sports Drink.

“As a kid I was obsessed with trying new tricks. This is how I got from there to here. You have to be obsessed. You have to have a drive inside that makes you want to keep getting better. I’m not a kid anymore. I’m competing with the best in the world.” the 18-year old halfpipe snowboarder, who was named to the US Team for the 2018 Winter Olympics, says on the 30-second spot, while on screen images of her snowboarding are seen.

The BODYARMOR team also includes Jack Eichel, Dez Bryant, James Harden, Ryan Blaney, Klay Thompson, Richard Sherman, Skylar Diggins-Smith, Andrew Luck, Mike Trout, and others, who have starred in the brand’s “Obsession Is Natural” ad campaign, created by Kobe Bryant and aimed at highlighting that obsession is the only one thing that “separates the bad from the good”, “the good from the great” and “the greats from the legends”.

The BODYARMOR SuperDrink contains, according to the brand, natural flavors, such as Blackout Berry, Tropical Punch, Grape, Lemonade, Watermelon Strawberry, Orange Mango, natural sweeteners, and no colors from artificial sources.