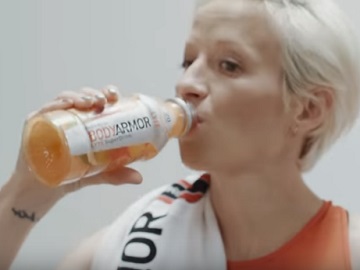 The 32-year-old professional soccer player, who currently plays as a midfielder/winger for Seattle Reign FC, talks about the impact BodyArmor had on her body, which “is not the same”, but in a good way. She says she now is “faster” and “stronger”, adding “I’m not what I was when I was 30. I’m better!”.

Rapinoe, who is a member of the LGBTQ community, after having come out publicly in 2012, signed an endorsement deal with the sports drink brand earlier this year, in March. In a statement for Outsports, a news site focusing on LGBT sports news, she said she “would actually drink this stuff,” mentioning that “It’s made with coconut water, and it’s high in potassium, low in sodium.” “At this point in my career I am getting older. I need to do everything I can, every little thing, to make sure I can stay healthy.” she also said.

With natural flavors and sweeteners and no colors from artificial sources, BODYARMOR LYTE Sports Drink contains 20 calories and 3g of sugar per serving. It is available in four flavors: Peach Mango, Blueberry Pomegranate, Orange Citrus, and Cherry Berry.