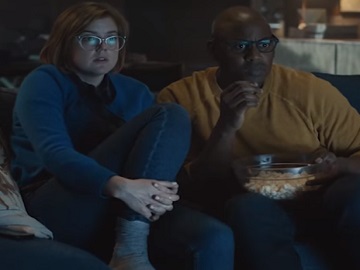 BMO has launched a new commercial urging you to prevent fraud on your credit card with a text.

Titled “Scary Roommates”, the 30-second spot shows a couple watching a scary movie on the couch. At some point, she receives a message from BMO informing her about suspicious activities on her credit card. Suddenly a roommate appears, apologizing for have frightened them, and tells them that with BMO she can just text them back and they’ll look into it right away.

The girl with the message exclaims: “WOW! Really?” and then another roommate appears scarring them again and saying “Sorry! But really is that easy”.

The scene ends with the man asking: “How many roommates do you have?”.

“That feeling you get when a bank puts security at your fingertips. That’s the BMO effect.” – the spokesperson says at the end of the spot.