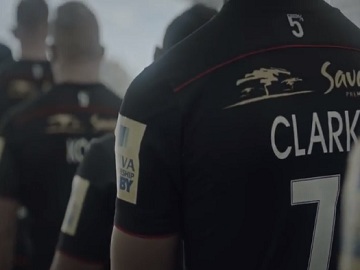 “They say success brings success. But it also brings expectation. Everyone wants to be you. You are every team’s trophy. And when it gets hard, only one thing will keep you going back for more, only one thing will keep you motivated, keep you hungry, keep you pushing forward: passion.” – the voiceover says in the 60-second spot, which features the Saracens’ players donning their uniforms (that feature both Betsafe and Allianz logos, the companies being the team’s sponsors) in the locker room, before they walk out onto the paddock, as well as on the paddock, during a game.

The spot ends with the onscreen line “Passion Overcomes The Odds”, which is the tagline of the company’s ad campaign of the same name launched in May 2017 and introducing the former WBC world cruiserweight champion Tony Bellew as the new Betsafe brand ambassador.

UFC World Champion Conor McGregor, who also became a Betsafe brand ambassador, starred in the campaign, as well, in December 2017, being in the spotlight in a film titled “The Walk of Adversity”.

Saracens are the reigning champions of the European Rugby Champions Cup, which they have won twice consecutively, in 2016 and 2017.