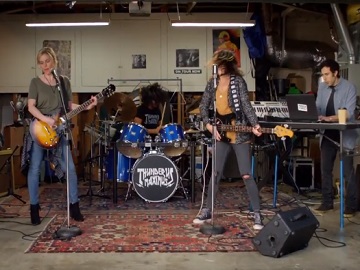 Best Buy highlights, in a new commercial, dubbed “Metal”, that you could save up to $150 on select computers powered by 8th Gen Intel Core Processors.

The 30-second spot features a rock band called Thunderus Maximus practicing in a garage and encountering a “situation” with the laptop they’re using to record their music. “If these metalheads are going to make it, they’re going to have to kick their sluggish old PC out of the band and upgrade to a new laptop from the one-of-a-kind selection only at Best Buy,” the voiceover says, adding – about a Lenovo Yoga laptop bought by one of the band members – that “has a speedy Intel Core Processor that gives it the power to record, mix and upload music way faster than that old clunker”.

The commercial ends with an onscreen line informing viewers that they can save up to $150 on select computers and with the voiceover saying the tagline “Upgrade your tech at Best Buy”. The offer excludes special order, clearance, open-box, refurbished and pre-owned items.

8th Gen Intel Core processors boast up to 2x better productivity with apps like Microsoft Word, Excel and PowerPoint and up to 1.9x better Web performance than a 5-year-old PC, allow users to edit their video footage up to 14.7x faster; rendering that used to take 45 minutes on a 5-year-old PC now takes 3 minutes, and edit and enhance photos up to 1.8x faster than a 5-year-old computer.