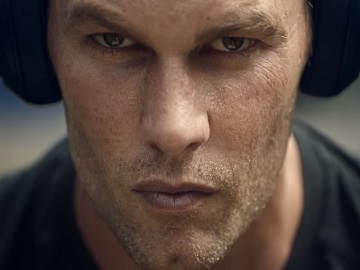 Tom Brady stars in the latest Beats by Dre commercial, part of the brand’s “Above The Noise” campaign.

“When they tell you you’re just a backup, you have to hear there’s just a guy to beat. When they tell you most players don’t last after 39, you have to hear: Be the last one standing! When they tell you ‘You bet you can’t do it again’, all you need to hear is.. It’s payback time!”, the voiceover says in the 30-second spot, which features the 40-year old New England Patriots quarterback who was suspended by the NFL after his alleged part in the Deflategate scandal for four games of the 2015 regular season and was named the Most Valuable Player of Super Bowl LI, championship game won by the Patriots.