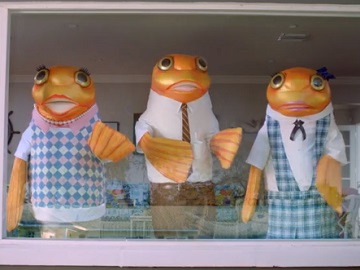 Dare Foods promotes the new Bear Paws Crackers, made with real fruits and veggies, with a hilarious commercial, featuring a bear and his neighbors, surprised by his strenght.

Titled “New Neighbors”, the 30-second ad opens with a couple of fish looking through the window at their new nighbors, a bear and his family, who are carrying things in their new house. “Honey, have you seen our new neighbor?” Mr. Fish asks his wife, who can’t help but exclaim “Oh, my!” “Yeah, just look at this guy. What does he think, he’s going to lift that…?” he also asks, referring to a closet that the bear lifts with no problem, leaving the witnesses almost speechless. “Oh, let’s see how your back feels tomorrow, buddy!” Mr. Fish says, without being heard, obviously. “I think his back will be just fine,” Mrs. Fish says. At this point, their teenage daughter shows up, asking what they are looking at. Informed about the new neighbors, the girl notices the guitar the bear’s teenage son is holding on his shoulder, which makes her look at him in open admiration. Mr. Fish sends her to her room, but she doesn’t listen to him, waving instead at her (new) love interest. “This is not good!” her father says.

“There’s a new bear in town,” the voiceover says, introducing the new Bear Paw Crackers, “made with real fruits and veggies”.