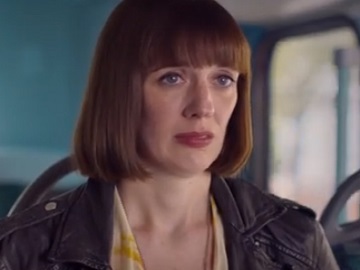 Barclays advertises its mobile app in a new advert, focused on the users’ ability to lock and unlock their card at any time.

The 30-second spot features a woman on a bus while a voiceover expresses her thoughts. “Where’s my debit card?” she asks herself, panicked that she might have lost it. Worried that everyone at her school reunion, where she’s headed to, will think she can’t afford to buy a drink, she tries to remember the last time she used her Barclays debit card. In the meantime, she takes out her smartphone and, accessing the Barclays mobile app, blocks her card so that no one could get near her £87.50. As she makes a mental effort to recall the places she went and details such as having it in her teeth when her hands were full, she realizes she put it in her “weird pocket”. To celebrate the moment, she unfreezes the card and decides to buy a round at the reunion.

The advert ends with the voiceover saying “Freeze and unfreeze your Barclays debit card with the Barclays Mobile Banking app” and adding the tagline “Take control of your money”.

The Barclays Mobile Banking app also allows users to check their balance, make payments, send money, change their cash machine limit, view their PIN, earn cashback and rewards, and see them tally up, and more. In addition, the bank has announced that users will also have the choice to see current account balances and transactions from other banks in their Barclays app as part of a new feature that will be available soon.