Home / Insurance & Financial / Bank of America Matt Damon Commercial Song – What Would You Like The Power To Do? 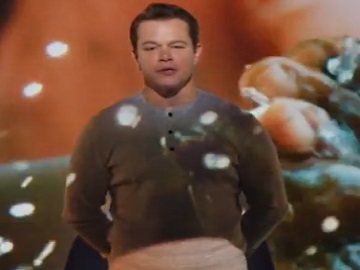 Bank of America celebrates its partners who have the power to make a difference in its latest marketing campaign, which raises the question “What would you like the power to do?”.

The first phase of the campaign debuted with a 30-second spot featuring Tory Burch, founder of the Tory Burch Foundation, which focuses on empowering women entrepreneurs, Ken Burns, founder of Florentine Films, which produces some of America’s most important documentaries, Matt Damon, co-founder of Water.org, which provides access to clean water and sanitation in developing countries, Sal Kahn, founder of Khan Academy, who revolutionized online learning through his intuitive approach, Marc Morial, president and CEO of the National Urban League, and a renowned civil rights leader, and Tim Shriver, president of Special Olympics, the global force that fosters inclusion and respect for individuals with intellectual disabilities.

The soundtrack music is Pharrell Williams’ 2015 song “Freedom” from the “Despicable Me 3 Original Motion Picture Soundtrack”.

The campaign, developed in collaboration with advertising agencies Hill Holliday and Super Union, aims to reflect “Bank of America’s focus on helping local communities thrive” and will also be the theme of the company’s advertising in support of World AIDS Day and highlight the work of its long-standing partner (RED).

The campaign, which is set to make its TV debut on November 18, during Sunday Night Football on NBC, with an ad featuring CEO Brian Moynihan framing the question and why it is core to the way the company does business, will also run across digital video, mobile, social media, and print.