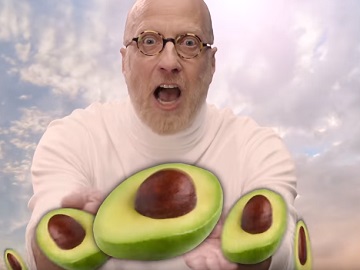 Chris Elliott will be seen this year during the Super Bowl’s ad breaks showcasing the versatility of avocado in a spot for Avocados From Mexico.

The brand has released a teaser starring the actor/comedian sharing an empowering message. “Is your life just terrible? I know how it feels.” – Elliott says at the beginning of the 30-second spot. He’s then introducing himself as a “big-time Hollywood actor” and tells viewers they deserve more. “I don’t know who you are, but you deserve more. More beauty. More joy. And more Avocados From Mexico.

On more things.” – Eliott adds, urging people to spread the avocados on everything, while on screen various dishes topped with avocado are seen.

Avocados From Mexico’s last year Super Bowl commercial was quite similar, with Jon Lovitz trying to convince people to eat avocados from Mexico. This is the fourth year in a row that the brand has teamed up with GSD&M for a Big Game ad. Its official Super Bowl spot will air during the second quarter, on February 4. The game is broadcast on NBC.

Previous: Squarespace Super Bowl 52 Keanu Reeves Commercial
Next: Groupon Tiffany Haddish Having Pedicure Done Commercial – Save Up to $100 a Week