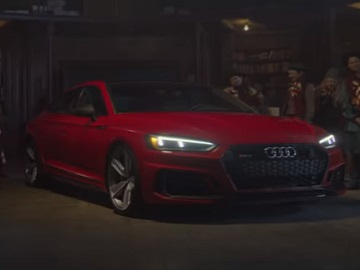 Audi states that “Progress is rewriting your own story” in its Christmas commercial, which features Santa debuting a whole new look.

The almost 4-minute long film opens with Santa Claus delivering gifts on Christmas nights and eating cookies until he notices a red Audi RS 5 Sportback outside of a neighboring house. He then notices also his reflection in a mirror and, once he gets back to the North Pole, he decides it’s time for him to take action and be a better version of himself. Thus, he starts to wake up early and run, seeks professional help from an elf, who trains him to lose weight for the rest of the year. Never losing determination to get in shape, he keeps staying active and, finally, adopts a new look in terms of hair and beard, too, as well as a new, stylish outfit.

The next Christmas, he wows everyone with his appearance, but he also gets an unexpected surprise: the Audi car he had dreamed of the entire year. After getting at the wheel, he heads out to deliver gifts, which are placed in the spacious trunk.

Created by M/H VCCP and directed by Craig Gillespie (whose portfolio includes “I, Tonya”), the commercial was praised by people from around the world.