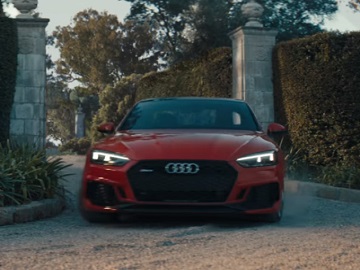 The spot, titled “Final Breath”, features an old man on his deathbed recalling key moments of his life, while his entire family sit by his side. “I’ve spent my life in motion. Relentlessly pushing forward. Headfirst into the unknown. I’ve accepted every challenge. Hobnobbed with royalty. Stood beside legends. I’ve loved and lost. And learned to love again. I’ve squeezed every drop of juice out of this life. I’m ready for the next one,”
the voiceover says, while on screen images of a man in various stages of his life is seen doing all those things mentioned by the voiceover. When the last sentence is told (“I’m ready for the next one”), the old man passes away, but, hearing the engine of the new Audi RS 5 Coupe outside, he wakes up and shouts “Waittttt!”.

The short film ends with the lines “Time to update your bucket list. The all-new RS 5 Coupe is here. Progress is seizing every moment.” flashing across the screen while the sports coupe is seen speeding down a road.

With a newly developed 2.9-liter TFSI biturbo V6 engine and an all-new exterior design marked by signature RS details, the Audi RS 5 Coupe delivers, according to the automaker, “performance and poise that make heads turn and hearts race.” Among its features are three-spoke multifunction flat-bottom steering wheel with RS badging and shift paddles, Fine Nappa leather seats with contrast honeycomb stitching, driver-centric cabin filled with immersive technology and RS carbon inlays, and a fully digital 12.3-inch instrument display that allows the driver to customize information such as audio and available MMI Navigation plus.