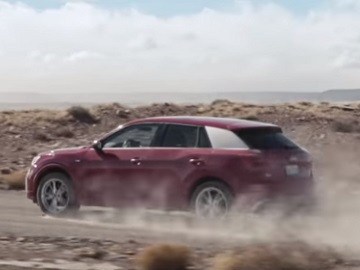 Audi UK shows Audi Q2 on a journey of discovery in the new “Chasing the Stars” campaign. The new Audi Q2 has been taken to Arizona, one of the best places in the world to hunt for meteorites, to showcase the car’s offroad capabilities and find out more about the lumps of rocks from outer space.

The automotive company has released a video featuring Meteor Crater, a mile-wide hole created some 50,000 years ago after a meteorite collided with Earth, which was the first destination throughout the journey, and Hopi Reservation, a high and barren area in the windswept plains of the north, with 12 small villages, where 13,000 members of the Hopi trobie, one of Arizona’s oldest tribes, dating back to Paleo-Indian times, are living. Former director of the Hopi Cultural Preservation Office, 67-year-old Leigh Kuwanwisiwma, shares stories with the Audi crew, talking about his daughter’s wedding day, when he saw a meteor coming over his house from the East.

Directed by Robbie McPherson, the film also showcases the Audi Q2, described as “a compact car that makes its presence felt” and “all you could look for in an urban SUV”. Equipped with dynamic suspension, 16” 5-spoke’ design alloy wheels, halogen headlights, 7” MMI display screen with 3.5″ Drivers Information System, smartphone interface, standard seats in Aspect cloth, it also features pedestrian detection and offers the convenience of cruise control. The available trims include SE, from £21,665, Sport, from £23,065, S line, from £25,315, and Edition #1, from £32,455.