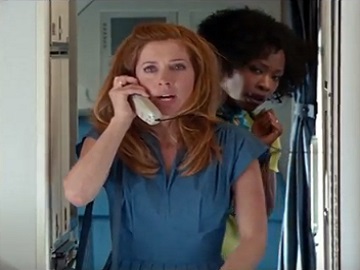 AT&T continues its “More for Your Thing” campaign with a new spot that advertises the company’s unlimited plans, highlighting that, from rom com to horror, you can get movies and more with these plans.

The ad, titled “Surprise,” features a young woman named Sally who stops a plane and, once onboard, holds a speech in front of the passengers directed to her boyfriend, Peter, apologizing for what she did and telling him she can’t wait for her to spend the rest of her life with him. The next shot sees them running out of the airport together and getting into a car. As they travel, the man starts asking his partner some questions, such as “How did you get through security without a ticket?” and “How did you get on the runaway?”, which makes her transform into a zombie. The romantic comedy soon turns into a horror, with the man being chased into the woods by the deadly creature.

The spot ends abruptly, with the onscreen lines “From rom com to horror. Get movies and more with AT&T unlimited plans.” and the company’s tagline “More for your thing. That’s our thing”.

AT&T launched the “More for Your Thing” campaign, which follows in the wake of BBDO’s 2017 “Terms and Conditions” campaign starring Mark Wahlberg, earlier this year, in February. The communication and entertainment company chose to connect all of its offerings – wireless voice, data and satellite TV – under one umbrella and inform consumers that it brings them more for their thing, whatever that is, from binge-watching their favorite shows or various YouTube videos to gaming, taking selfies, or watching other enterntainment on their phones.