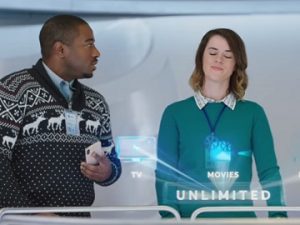 AT&T continues its “Innovations” series with a new spot, that promotes the company’s limited-time deal on the latest iPhone.

Set in the AT&T Innovations center, the 30-second ad features an employee telling the co-worker next to him he still can’t believe how incredible the screen of the new iPhone X is. The woman answers that the company’s Unlimited plan “really takes things to the next level, with your choice of the best in TV, movies or musics.” “It’s the perfect holiday upgrade,” the man replies, which makes the girl say “I know what I’m asking Santa for this year.” Surprised to hear that, the guest asks her if she’s still writing letters to Santa. “Oh, please, I send him emails,” she clarifies.

When the guy asks her to give him Santa’s e-mail address, she refuses though, saying she doesn’t feel comfortable sharing.

The commercial ends with the voiceover urging viewers to get the new iPhone XS and AT&T’s Unlimited Plan with their choice of the best in TV, movies or music, and adding the company’s tagline, “More for Your Thing. That’s Our Thing”.

AT&T has been promoting its offers through various other commercials set in the AT&T Innovations lab. One of them features Terry Crews as he reluctantly steps into a device that literally shrinks the biggest names in entertainment so they can fit into the AT&T Wireless Unlimited Plan after Andre Drummond declines to go first.df