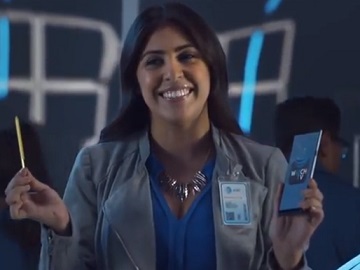 Titled “It’s Productive”, the 30-second ad is set at the AT&T headquarters and features a tour guide (played by Michelle Ortiz) explaining to a group how the company offers its customers more for their thing. “At AT&T Innovations we give you more for your thing. Here we’re adding TV and movies from our Unlimited Plan to the powerful new Samsung Galaxy Note 9, the perfect device for entertainment and productivity,” the woman says, while showing the group the Galaxy Note 9 and the S Pen. At this point, a man from the group, played by Ed Helms, concludes “it’s essentially the Ed Helms of devices”, arguing that he (Ed Helms) is “both very entertaining and productive” and mentioning that this is completely his “unbiaised opinion”.

The commercial ends with the voiceover urging viewers to buy a Galaxy Note 9 and get one free, while onscreen lines inform that this limited-time offer, which expires on August 30, is valid when you buy both on AT&T Next ($1000 each) with an Unlimited Wireless Plan (min. $65/month combined after discount). $30 activation and other terms apply, so viewers are advised to see offer details at the company’s website.

This is the second installment in the AT&T Innovations series. The first one featured Terry Crews and Andre Drummond as members of a group visiting the AT&T Innovations headquarters, where the company literally shrinks the biggest names in entertainment so they can fit into the AT&T Wireless Unlimited Plan. After Drummond declines to get into the shrinking device, Crews steps in, but – despite his intention of acting though – he squeals in anticipation as the shrink ray hits him.