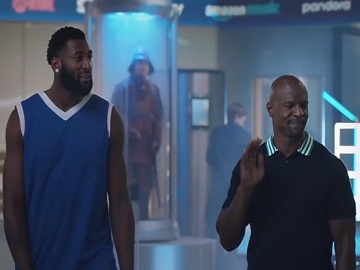 The spot is set at the AT&T Innovations headquarters and features a guide stopping during a group tour to show off where the company gives people more for their thing and literally shrinks the biggest names in entertainment so they can fit into the AT&T Wireless Unlimited Plan. After Drummond’s refusal to step into the shrinking device, Crews reluctantly steps in and, even though he tries to act tough, he squeals in anticipation as the shrink ray hits him, especially after learning that the operation is permanent.

The commercial ends with the voiceover urging you to get unlimited data, live TV and your choice of an extra on AT&T and adding the tagline “More for Your Thing. That’s Our Thing”.

On July 20, Drummond posted on his Instagram page, telling fans he’s having some fun with his brother Terry Crews filming the commercial for AT&T.

Crews and Drummond have thus joined the likes of Bo Jackson, Desmond Howard, who have also starred in AT&T ads.

The “More for Your Thing. That’s Our Thing” campaign debuted earlier this year, in February, with an anthem aimed at highlighting the company’s offerings – wireless voice, data and satellite TV- all placed under one umbrella for customers to get everything they need.