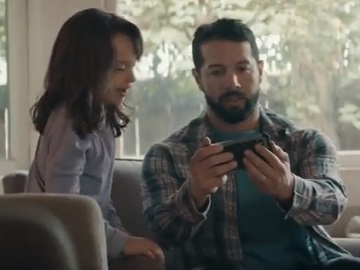 AT&T informs, in a new touching commercial, that it offers discounts to military, veterans, first responders and their families.

The 30-second spot, titled “The Wait,” features a father who, from the moment the wakes up, holds his cellphone close almost every minute, as if he’s waiting for an extremely important call. In the kitchen, while his little daughter is pouring milk over her cereal, he’s looking at the phone and the kid almost spills the milk, while out for grocery shopping he prefers to carry two bags in one hand so that he could hold the phone in the other, when picking up the girl from school, he’s still with the phone in his hand, at work, as well, which makes his boss give him a reproachful look. In the afternoon, his phone is finally seen on the living room table, where the kid is playing. She calls him, announcing that mom is calling, and he immediately arrives and starts a videocall with his wife, who it turns out is a military.

The commercial ends with the lines “Some calls you can’t afford to miss”, “AT&T proudly offers discounts to military, veterans, first responders and their families” flashing across the screen.

AT&T is offering 25% off each line with an AT&T Unlimited &More wireless plan, which includes over 30 channels of live TV, allowing users to binge 15,000 movies and hit shows, unlimited talk, text, and data with no overage fees ever, the possibility to send unlimited texts to 120 countries, and enjoy unlimited calls to Mexico & Canada, and free roaming while they are there.