Home / ICT / AT&T Basketball Player Who Is a Robot Commercial 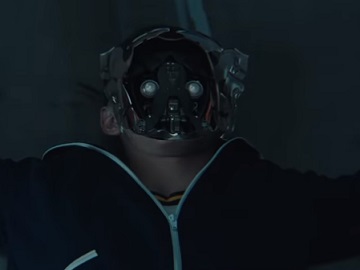 AT&T continues to promote its unlimited plans with a new commercial, aimed at highlighting that, from sports movies to sci-fi, AT&T gives you more for your thing.

The 90-second spot opens with a scene featuring a basketball game in the ’80, filled with tension since one of the teams, Vikings, has one shot at not losing the game. When one of the players manages to score, the team’s fans start shouting out with joy and the player’s teammates are lifting him up in the air. In the locker room, when the day’s hero remains alone, he finds himself approached by two mysterious men. “Please, I just wanna stay,” the young player tells them, as they get closer, asking him if he forgot about them. “How many times we gotta do this?” one of the men asks the boy, who, in order to protect himself, pushes one of them through the wall with an out-of-this-world force. He doesn’t have time, though, to react when the other man hits him, making him crash into lockers. His attempt to stand up and continue the fight is then thwarted by the mysterious man, who uses a device to put him down again. “It’s enough now,” he says. This time, the promising basketball player doesn’t stand up anymore. It actually turns out he wasn’t a human, but a robot, when the skin on his face disappears, revealing the inside of his head.

The end of the film sees the two men dragging the human/robot down the dark hallway and the robot’s eyes shining in the dark. “From sport dramas to sci-fi, get movies and more with AT&T Unlimited Plans,” onscreen lines read, before the tagline “More for Your Thing. That’s Our Thing.” flashes across the screen.

Since launching its “More for Your Thing” campaign (developed in partnership with BBDO, Organic and Hearts & Science), back in February, AT&T has advertised its unlimited plans in several other similar commercial, that were starting like a certain type of film and were ending on a totally different note, specific to a different genre. A romantic comedy featuring a woman who stops a plane to get to her boyfriend ends like a horror, and a suspense-filled movie, featuring a bus that’s almost falling into an abyss, ends like a musical.