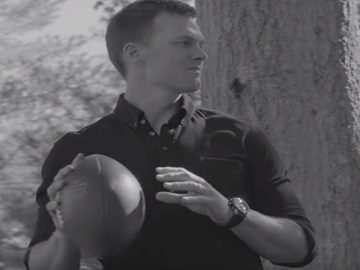 British luxury car manufacturer Aston Martin has tapped Tom Brady to star in the campaign for the Aston Martin DB11, the most powerful and efficient ‘DB’ production model in Aston Martin’s history.

The spot features the New England Patriots quarterback talking about his lucky numbers. “When you hear the roar of the engine, you step on the gas and you can feel the power. It’s such a classic, beautiful car. Number 12 has been a really great number for me. When I showed up to my professional team, the Patriots, number 12 was on the locker. It worked pretty good for me, so I stuck with it. The year 2000 was a good year and the start of a new chapter in my life. I ended up taking so many of the things that I learned and applying those over the course of the last 18 years. It was probably at the age of 14 that I really wanted to focus on football. There’s so many players involved, so much chemistry, it’s really magical when it all comes together. The most important number was 2018 and that’s the year that we’re in. That’s the one that I’m most focused on. I’m gonna make the best of it,” Brady is says in voiceover on the 45-second commercial, which ends with the tagline “Beautiful is a number” flashing across the screen.

Available as a Coupe with the 5.2-liter twin-turbocharged V12 or the 4.0-liter twin-turbocharged V8 engine, DB11 takes the automaker’s grand touring heritage to “unprecedented heights,” according to the brand. The DB11 line-up includes DB11 AMR, which is the new flagship of the DB11 range, boasting greater power, increased performance, enhanced driving dynamics and a more characterful exhaust note, and DB11 Volante, which offers an equally stunning, open-topped GT experience.

Aston Martin teamed up with Brady in May 2017 for a campaign titled “Category of One: Why Beautiful Matters”. When his long-term partnership with the car manufacturer was announced, Brady said in a press statement: “Aston Martin exemplifies dedication to the craft of car making through a meticulous attention to detail. While 104 years of heritage are reflected in each hand-built car, with product from the DB11 to the Aston Martin Valkyrie, this brand is primed to excel for the next 100 years as well. As a long-time fan and driver I am honored to join the Aston Martin team at this special moment in the company’s history”.