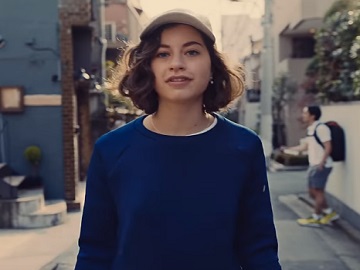 ASICS has released a manifesto, titled I MOVE ME and aimed at highlighting that “Moving changes you for the better, which changes everyone you play, work, live and love with”.

Described as a philosophy on life, I MOVE ME sets out to remind you that “you and only you are all you need to overcome everything”. The spot shines light on this movement, explaining what “I” and “Me” mean. “I is the the best of you. Your ‘Yes, Sir’, your dreams, your culture, your corks, and your grace.”, a young man says as he walks down a street and people around him are moving. “Me holds you back. It’s your ‘No’ side, your doubts, your vices, your resistance, your second guessing.”, a young woman explains, while looking straight to the camera on her way through the city. Next, it is highlighted that when “I” and “Me” become one, they become unstoppable.

Launched in July 2017, the I MOVE ME campaign also features Grammy-nominated, DJ/producer, international entrepreneur and fitness fanatic Steve Aoki, two of ASICS sponsored athletes, namely four-time World Champion Wrestler and 2012 Olympic Gold Medalist Jordan Burroughs and World Champion track and field athlete and bobsledder, and three-time Olympian Lolo Jones, as well as several individuals presented as “Movers”, who have amazing life stories and are a source of inspiration for others to start and/or keep moving, proving that movement is indeed life-changing. Among them is Casey, a man who, after breaking his neck while diving into a pool, has been told that he would never walk again. He refused to accept this terrible diagnosis and willed himself to move, and now he is a competitive triathlete. Tavian, who became a health teacher and hand cyclist after having been paralyzed following a car accident, Kayla, who found in basketball her life’s passion after undergoing a gender confirmation surgery, Deketa, who was homeless when she found beach volleyball, are other Movers who shared their story for the footwear and sports equipment brand.