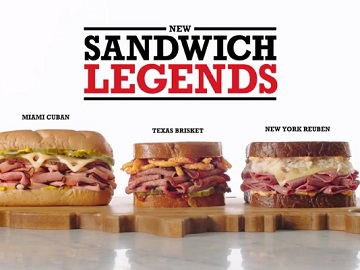 The Texas Brisket, with slowly smoked brisket, smoky barbecue sauce, crispy onion strings, and pickles on Texas toast, the New York Reuben, with kraut and corned beef served on toasted marble rye bread, and the Miami Cuban, with slow roasted pork loin, pit-smoked ham, mustard, pickles,and Swiss cheese on a toasted roll, described as “a sandwich from a city that’s so far south it’s close to Cuba”, are all shown on wooden chop boards in the shape of the respective cities. “You could travel across the country to try these three legendary sandwiches, but apparently you can’t bring a therapy peacock on a plane, so just come to Arby’s.” American actor Ving Rhames, who serves as a voiceover, says on the 30-second spot featuring all the three sandwiches, before adding the chain’s tagline, “We have the meats”.

The Sandwich Legends line-up rolls on at Arby’s for a limited time at participating restaurants.