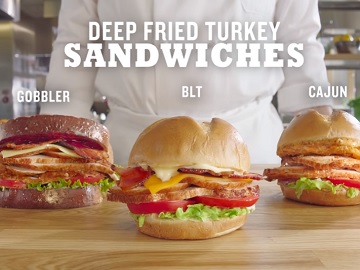 “How did Arby’s finally make the turkey sandwich exciting? We deep-fried it,” the voiceover says on the 15-second spot, specifying then “just the turkey part, not the whole sandwich”.

Arby’s turkeys are seasoned with salt and pepper and infused with a brown sugar brine, then oven-roasted, deep-fried, and sliced. The meat comes boneless with the skin on, and is served on the three sandwiches, available for a limited-time only at participating locations nationwide.