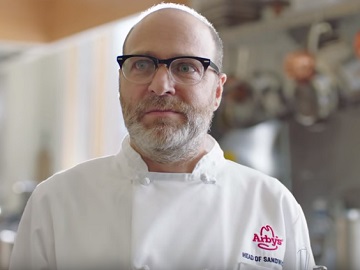 Arby’s highlights it has more than roast beef in a new ad, focused on its wide range of sandwiches.

The spot features “Arby’s Head of Sandwiches” walking through a restaurant kitchen and asking himself why “people still think Arby’s is just roast beef” when the brand has 17 other sandwiches. He comes with a series of possible answers, that include “all those 60-foot signs that say ‘Arby’s Roast Beef Sandwich Is Delicious'” and the consumers’ last visit to Arby’s, which was with their grandparents, “who ate exclusively roast beef every meal, somehow”.

The spot is part of a campaign from creative agency Fallon aimed at reaching younger consumers who may not eat roast beef as much and have, instead, a taste for different products. Launched on Sunday, September 9, in the U.S. across TV and digital platforms, the campaign does not feature a celebrity in the role of the Head of Sandwiches because Arby’s wanted to “keep the food at the center of things,” according to Arby’s marketing chief, Jim Taylor.

Consumers will get the chance to interact with the fictional head of sandwiches through a series of “brand experiences” organized by the fast-food chain as part of the campaign.