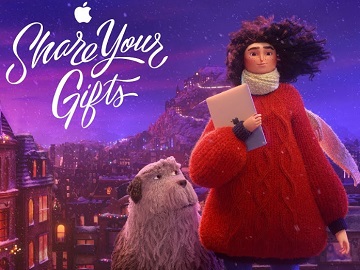 Apple encourages people to share their creative talent with those around in the Christmas commercial just released.

The 3-minute animated film tells the story of a girl living with her dog in an attic flat, who’s using her talent every day to create something on sheets of paper that are not showed, though. She’s only featured with her stickered MacBook in front of her – at home and even out, in the city, coming up with creations that end up in a box, as she wants to keep them a secret. One day, though, her furry companion opens the window and the pieces of paper are all blown away by the wind. She rushes out to take them back, but she doesn’t manage to do it. Soon, she find herself surrounded by dozens of people who look at her work and seem to appreciate it.

The ad, aimed at encouraging people to express their creative talents, whether it be digitally with music or video creation, or simply cooking, is set to the tune of “Come Out and Play,” a new song by 16-year-old global pop-phenom Billie Eilish that made its debut in this ad.

Apple has also released, along with its holiday ad, a series of three videos that feature creators professionals explaing how they create videos (stories with color, storied by editing and music, respectively), what goes on behind the scenes, and how they get the work done, basically, using their Apple devices, including iMac, MacBook Pro, and iPhone.