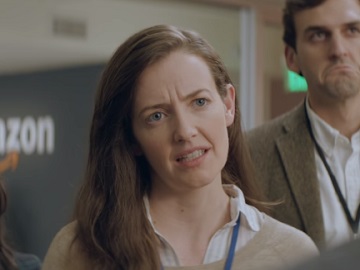 Alexa gets replaced in Amazon’s Super Bowl LII commercial. A teaser released on January 26 by the tech giant reveals that Alexa lost her voice and that her replacement is ready to take on the role.

The 30-second teaser opens with a woman in her bathroom, brushing her teeth and asking Alexa to tell her the weather. The virtual personal assistant starts informing her on the temperature, but a cough doesn’t allow her to continue. Next, a news presenter announces on breaking news that Amazon’s Alexa lost her voice, which mobilizes the company’s team. CEO Jeff Bezos is seen asking a team manager how it was possible for Alexa to lose her voice and the woman tells him they have the replacements ready and reassures him that “this is going to work” just nodding when he asks if “this is going to work”, without answering though with a clear “Yes”.

The full version of the ad, 90 seconds long, from creative shop Lucky Generals and Amazon’s internal creative team D1, will run during the fourth quarter of the Big Game, which takes place on February 4, at the U.S. Bank Stadium in Minneapolis, and is broadcast on NBC.

Previous: PayPal App Commercial: Little Girls at Playdate
Next: TurboTax The Dark Commercial – Snap a Photo of Your W2