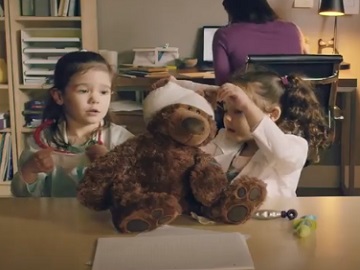 Amazon has released a series of new ads to promote the all-new Echo and Echo Dot, focusing on the tasks Alexa can help you.

One of them, highlighting that “Giving back just got easier”, is introducing Alexa Donations, the new way to donate to your favorite charities just by asking Alexa. The 15-second spot, titled “Little Doctors”, features two little girls playing doctors with a teddy bear as their patient. While one of them takes the toy’s pulse, the other wraps a bandage around its head. When the nurse is asked to bring more bandages, their mom’s shows up, taking a seat at her desk. She then asks Alexa to make a donation to St. Jude and Alexa wants to know the amount of money to be donated.

The tech giant announced the new feature, powered by Amazon Pay, a week ago. Currently, there are 48 charities and nonprofits users can choose from. Internet-oriented groups like the Tor Project, Wikimedia Foundation, and the media site ProPublica, as well as commonly known organizations, such as American Red Cross, American Cancer Society and are only some of them. St Jude, mentioned in the ad, is a leading children’s hospital pioneering research and treatments for kids with cancer and other life-threatening diseases. Located in Memphis, Tennessee, the hospital reportedly costs more than $2 million a day to run and there is no cost to the patient to be treated. Amazon noted in a press release that “this is just the beginning” and that “this list will continue to grow”.