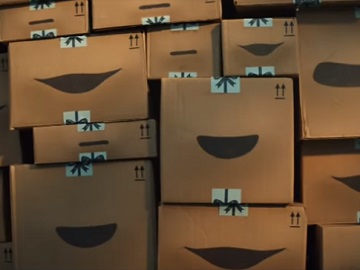 The Amazon boxes are back in full voice, singing out loud for those feeling the festive spirit, in the company’s 2018 Christmas ad.

The 90-second spot follows the singing boxes as they perform, in solos and in groups, the 1981 song “Can You Feel It” by American group the Jacksons (included on their fourteenth studio album, “Triumph”). Carried by deliverymen in different places, to their shipping destinations, some of the “protagonists” are even engaging in synchronized choreography in a distribution center. Recipients holding their boxes and walking down the city streets are also shown in a scene aimed at illustrating that they are connected somehow by this common thing.

The end of the commercial sees a little girl, featured at the beginning, as well, shushing her Amazon box before going to sleep. The lit up city shown throughout the video is then shown in her snow globe.

Last year, Amazon has also put its boxes featuring smiles into the spotlight, featuring, in its Christmas commercial, dozens of boxes singing their way to their shipping destinations, with a version of Roger Hodgson’s “Give a Little Bit” used as soundtrack.

In 2016, the company celebrated, in its holiday ad, the friendship of a vicar and an imam who give to each other as a Christmas gift the same thing.

Previous: Groupon Christmas Commercial – Act Now
Next: E*TRADE Dogs Commercial Song – There are Dogs with Better Lives than You