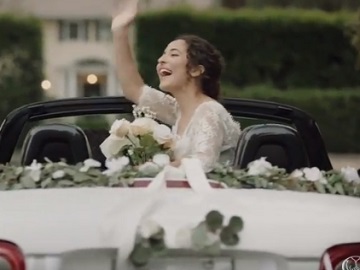 Mayhem is back in a series of new Allstate commercials, released with the #WeddingsAreMayhem hashtag.

In one of them, actor Dean Winters, who portrays Mayhem, is a tin can tied to the bumper of a car used by some newly weds, because he doesn’t think enough people heard about the couple’s big day and “Nothing says ‘We got married’ like a 12 ounce piece of scrap metal”. As he’s being dragged on the street, he asks passersby to honk if they like joint assets and highlights that, “Now you’re so busy soaking up all this attention, you don’t see the car in front of you”. As he finishes his sentence, the convertible driven by the groom is seen bumping into a car.

The end of the commercial sees Mayhem warning people about the damage he could cause not only on the big day, but each and every single day. “And if I can crash your ‘perfect day,’ imagine what I can do to the rest of ’em,” he says looking at the camera and urging then viewers to “get Allstate and be better protected from Mayhem”.

The advertising character Mayhem, wearing a black suit, white dress shirt, and black necktie, has been created by Leo Burnett Worldwide and has been played by Dean Winters since the campaign was launched, in mid-June 2010. At the end of last year, he made a New Year’s resolution to help keep people and property safe, but he quickly broke it and returned to his old habit of causing chaos and damage.