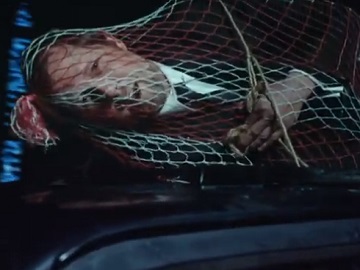 Mayhem is the perfect Douglas fir until he rolls off a car and causes an auto accident in the latest Allstate commercial, which encourages viewers to get Allstate and be better protected from Mayhem.

The 30-second spot features a father with his two little daughters in a Christmas market, looking for a Christmas tree. “I’m the world’s greatest Douglas Fir,” Mayhem (played by actor Dean Winters) says as he portrays the perfect Douglas fir. “I’m the perfect shape, I’m the perfect color. My scent, like making love to a lumberjack. But halfway home, my twine gets loose. And your cut-rate insurance might not pay for this,” he also says, referring to an accident he causes when rolling off the car of the man who bought it.

“So get Allstate. Where you can save money and be better protected from Mayhem like me,” he urges viewers at the end of the commercial.

The advertising character Mayhem, wearing a black suit, white dress shirt, and black necktie, has been created by Leo Burnett Worldwide and has been played by Dean Winters since the campaign was launched, in mid-June 2010. In February February 2011, he rose to third as most-recognized insurance advertising character, behind the Geico gecko and Flo from Progressive Insurance. At the end of last year, he made a New Year’s resolution to help keep people and property safe, but he quickly broke it and returned to his old habit of causing chaos and damage.

This year, he portrayed a ring bearer who swallows the ring and a tin can tied to the bumper of a car used by some newly weds, who bump into a car because of the noise.