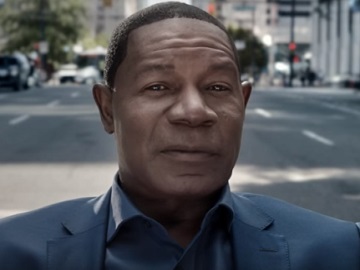 Actor Dennis Haysbert stars in a new Allstate commercial, presenting the company’s innovative tool Drivewise, which is designed to help users drive safely and earn rewards for their safe driving.

Titled “4-Way Observation,” the spot features Haysbert sitting in an armchair in the middle of a trafficked street, saying that “every insurance company hopes you drive safely, but Allstate actually helps you drive safely with Drivewise.” He then specifies that this feature, which is available within the Allstate Mobile app, “lets you know when you go too fast and brake too hard, with feedback to help you drive safely, giving you the power to actually lower your cost.” He also mentions that it can’t do anything in case you decide to do stunts like making the car move on two wheels only. “Now that you know the truth… are you in Good Hands?” he asks at the end of the commercial.

The insurance company informs that, whether you’re an Allstate customer or not, you can earn rewards for your everyday safe driving with Drivewise. In order to do that, you just have to download the Allstate mobile app and activate Drivewise to get personalized features to help keep you safe on the road, and – in addition – earn Allstate Rewards points by completing safe driving challenges. Points are redeemable for savings on your favorite brands, daily deals, gift cards, travel, merchandise, and more.

The 64-year-old actor Dennis Haysbert, also known for his roles in the Major League film trilogy, in the 1997 political thriller Absolute Power, on the drama series The Unit, and the sci-fi series Incorporated, became an Allstate spokesman for the insurance company in 2003. Between 2003 and 2016, he appeared in more than 250 commercials. Actor Dean Winters joined the Allstate family as a spokesman in 2010. He portrays “Mayhem” since then, personifying the hazards drivers face.