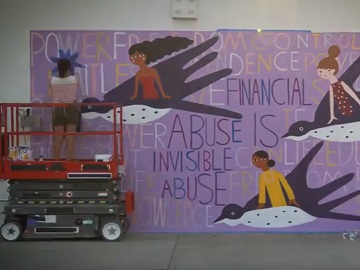 The Allstate Foundation Purple Purse shines a light on the financial abuse through its latest street art campaign, which is aimed at making this “invisible weapon, used to keep victims from leaving violent relationship, visible”.

One of the latest spots features the creative process behind the artist Carolyn Suzuki’s share-worthy mural in Los Angeles. As usual, passersby are encouraged to explore the art, snap a pic and share the invisible issue for financial abuse to help give victims a #SafeWayOut.

The first mural, created by artist Isabel Castillo Guijarro, was unveiled by Serena Williams, who is a program ambassador, on June 20, at Tictail Market, 90 Orchard St. in New York City. The other Purple Purse street art murals were unveiled at later stages and will stay up through October, National Domestic Violence Awareness Month. The mural from Houston, created by Ana Marietta, is at The Heights, the mural from New Orleans, created by Milagros Collective, is on Oak Street, the mural created by Lauren Asta is in Wicker Park, and the one created by Ellen Picken is in Seattle.