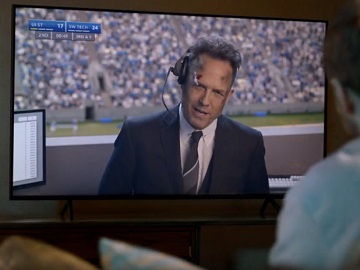 Dean Winters is back to the small screen as Mayhem in a new ad for Allstate, aimed at highlighting that “Football Season is Mayhem” and encouraging people to get the right coverage.

The 15-second spot features Mayhem introducing himself as “the play-by-play announcer who’s in your ear all game long” and bringing distractions to a group of friends watching a game on TV. This is the reason why they don’t hear the upstairs toilet overflowing. “If I can show up on gameday, imagine what could happen the rest of the week,” Mayhem also says at the end of the spot.

Mayhem, created by agency Leo Burnett Worldwide, became in February 2011, after being introduced in June 2010, the third most recognized insurance character, behind the GEICO gecko and Progressive Insurance’s Flo (played by Stephanie Courtney). In other ads released earlier this year, with the #WeddingsAreMayhem hashtag, he portrays a 4-year-old ring bearer who swallows the ring and a tin can tied to the bumper of a car used by some newly weds.