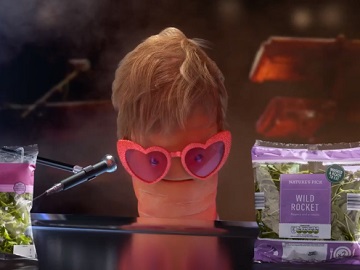 Kevin the Carrot is replaced by Veg Dwight in the latest ad released by Aldi UK. The 20-second spot, a nod to the 2018 Christmas advert from John Lewis & Partners, features a carrot with a pair of pink heart-shaped eyeglasses and a wig that nods at Elton John’s look playing the piano onstage, in front of a crowded audience. “I like this rocket,” Veg Dwight says, referring to Wild Rocket available at Tesco for 89p/60g pack. “And I like this rocket,” he adds, pointing toward a 60g bag of Wild Rocket that costs 49p at Aldi. “But I’m more of a carrot man,” he then specifies, singing “I’m a carrot maaaan” (a nod to Elton John’s 1972 hit single “Rocket Man,” from his fifth studio album, “Honky Château”) to the audience’s delight.

One of the latest similar adverts from Aldi features a young man wearing an unbuttoned white shirt who says, in a thready voice, that he likes a Moet & Chandon champagne, that costs £34 at Tesco, and a champagne from Aldi, that costs £11.49.

The supermarket chain, famous for using Kevin the Carrot in its Christmas campaign in the last years, has also been promoting various other products that are cheaper at Aldi with respect to other retailers. In other recent commercials featuring the beloved vegetable and its family members, Aldi showcases its range of frozen party food, which includes Duck/Chicken Selection (£2.69/240g or 300g), 60 Piece Indian Selection (£3.99/1.2 kg), 12 Piece Vegetable Oriental Selection (£1.99/212g) and more, its range of Christmas desserts, Exquisite Florentines (£3.99/220g), Melting Snowflake Pudding (£5.99/450g), 18 Month Matured Christmas Pudding (£4.49/545g), and announced the arrival of the turkey, on December 19. This year, Aldi’s Christmas campaign also features an evil Parsnip that kidnaps Kevin’s family, but is defeated by Kevin, who manages to save his loved ones.