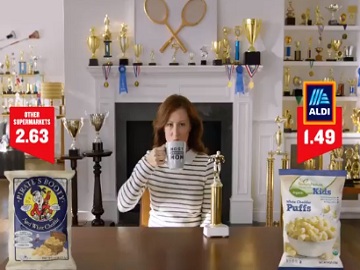 ALDI highlights, in a new commercial, that White Cheddar Puffs are available at a cheaper price at ALDI compared to other supermarkets.

“You’ll like them both, but love our price.” – the voiceover says at the end of the commercial.

The global discount supermarket chain also mentions that the “Other Supermarkets” price is based upon an average of prices for brand name product sold at leading national competitors in the area where ALDI has stores during the period 12/02/17 to 12/08/17, and that savings at individual stores may vary.

Previous: TurboTax Live Ghost in the Attic Commercial
Next: IHOP $3.99 All You Can Eat Pancakes Pilots Commercial